These are general tips that are not restricted to any one particular game for additional performance.

Any setting used from this point on is your responsibility! Make sure you know what you are doing as no one involved with this Wikipedia is responsible for what you do with your device. Custom resolutions are really the only thing you should have to worry about though.

HiAlgo Switch does not appear to always work with the next trick. 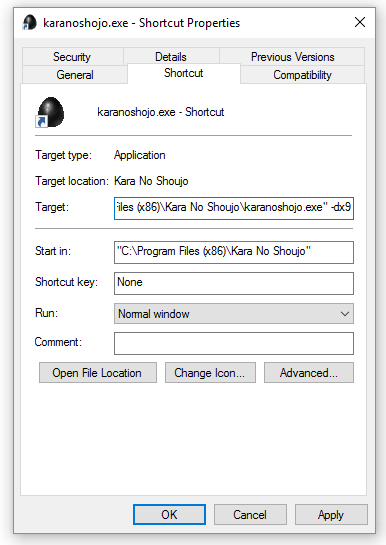 Not all games will support this! However, some games such as Crysis and Murdered Soul Suspect, have the ability to use older versions of DirectX. By using an older version you may see a game go from not very playable to at least playable. However, as mentioned before, not all games support this modification.

To use DirectX9 or DirectX10, you simply add the line -dx9 or -dx10 to the end of the target line found in the properties of a shorcut to your game. If you don't already have one on your desktop, you can simply create one.

So first go to the shortcut, right click it, go properties, find the box that has "target" next to it. Go to the end of the line and just after the quotation mark, type a space and put -dx9 or -dx10.

A good starting place would be to add the custom resolution of 544 x 960 60HZ as this is a 16:9 screen resolution that I have personally tested and found to work

Should for any reason your screen not accept the resolution and no longer display what is happening, the best way to resolve it will be to wait for 15 seconds and see if it returns to the default settings. If it doesn't, don't panic, simply hook your console up to an hdmi source and see if you can backtrack through that hdmi source.

Retrieved from "https://gpdwin.fandom.com/wiki/General_Tips_for_Windows_Gaming_on_the_GPDWin?oldid=252"
Community content is available under CC-BY-SA unless otherwise noted.